Well just off the road and across the tracks here in the Pines we have an urban art gallery few know about. In this little spot that was once a hamlet, if it ever made it to that size where people outnumbered the deer, we have an art gallery that people travel for hours to find within the heart of the Pasadena section of Whiting NJ.  A gallery built on the site of the Pasadena Terracotta Factory or as others know it as Brooks Brae.

Who would figure there would be an art gallery here…

Well on the other side of the tracks in the old brick factory there is one, but unlike other factories repurposed for galleries within their hollow structures,  The Woohoo in the Pines Clay Gallery has no overhead and a free admission.

Many well known Piney artists have had group shows here over the years. Sometimes we are graced by the well of inspiration in which those two great cities can offer, Philadelphia and New York, that affords us the trip to our little gallery under the sun. For we have the best lighting that the universe can offer. Below is a collection of past works that hung on Brooks Brae’s walls. 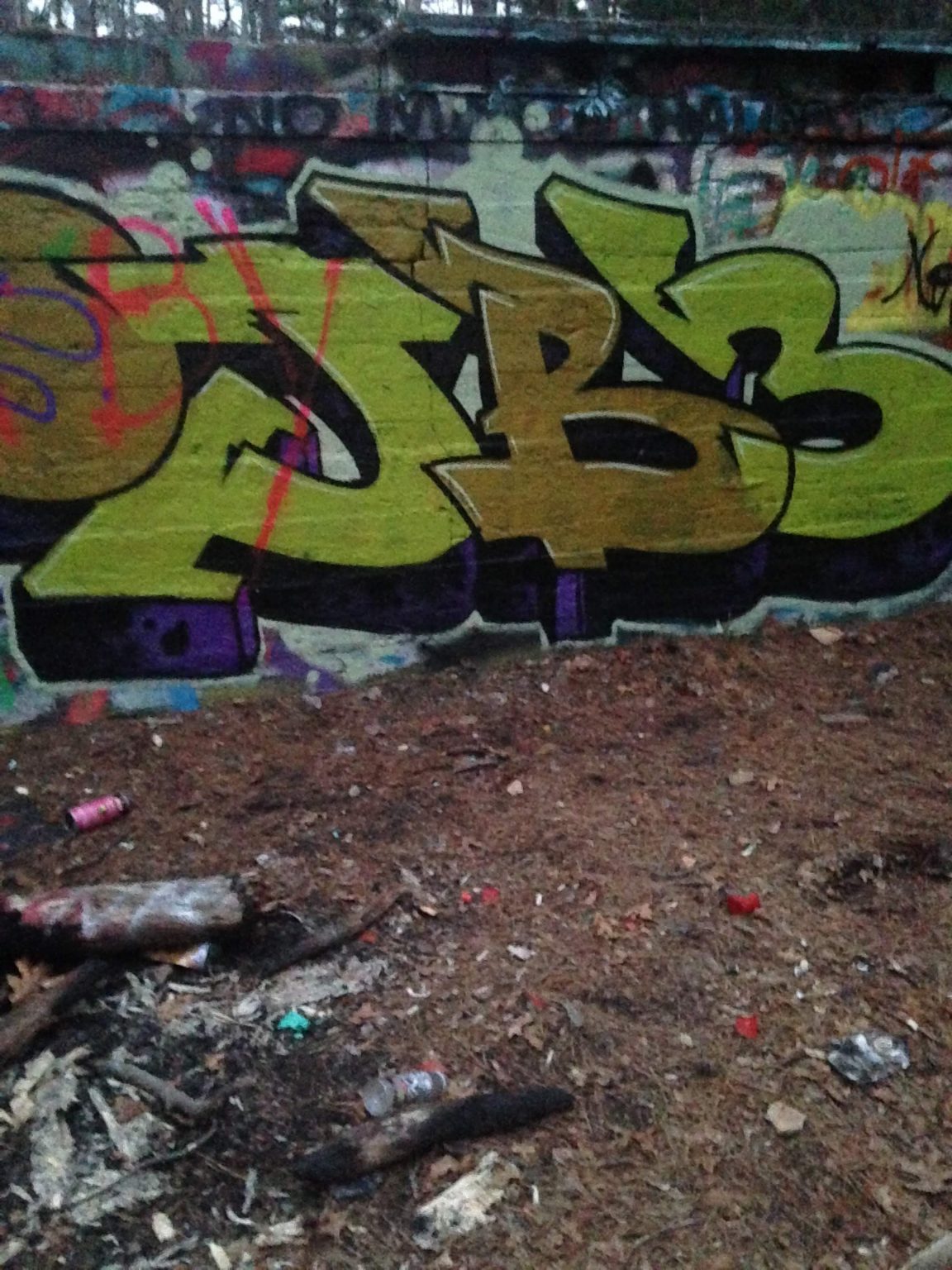 On many of our openings, most likely spurred on by the moonshine and wine offered, many couples have disappeared into the ovens where things get really hot. The only way to discover the ovens’ secrets is to bring a fluorescent light, for we are not talking. Artists are a truly a saucy bunch…

This underground room sits below the kilns that once fired the sewer pipes that were manufactured here. It is amazing what filth has occurred in this space to set young lovers’ hearts ablaze, for at least a half-hour or so before they were discovered missing from our many galas. Limelight, Studio 54, and Manray have nothing on our stains on the walls of the ovens.

For the more sensitive personalities or those people who need a little romance before entering the ovens, or for those guys needing a space in which to promise to call the girls after leaving the ovens, we have a fine garden surrounding the museum. Grounds cultivated by Frederick Law Olmstead’s neighbor’s mailman’s great-great-grandson. A future destination for Banksy, if he could do art for art’s sake…

The museum at Brooksbrae also has plenty of seating for those who need to converse while our plentiful hors d’oeuvres are being passed. The gallery can be rented for private business functions and weddings on the weekends May through November. Plus our door is open 24-7!

Right now we have whitewashed our walls and we are placing a call for new art for our Spring Show based on the artistic mind and isolation. Stop in and submit your slides for review or post your .jpgs in the comment area below.

It is your favorite child travel adviser, Tyler the Boy on the Move,  once again bringing you the best in last-minute vacations. Your road trip planner for the weekend getaway to the coolest and strangest places in America. How do I know about them all? My parents are contract workers in the software industry and keep moving the family every 6 months….

Yes there is a Cincinnati Subway! Well, you can’t call it exactly a system though… They converted the section of the Erie Canal that ran through the city into a tunnel and a boulevard above. Then never used it. Now they have to maintain the subway to keep the boulevard from falling in and it is used for the water main to go through for the city.  Only the urban explorers and the homeless use them now. Well I figured I am an Urban Explorer and homeless, so I better head under the ground and check it out. Well, I have been in 6 homes within the last 2 years, so that counts as homeless… It was cool! My friend Chris Dowgin would of loved climbing through it! I like to rub that fact in his face that I got to go in and he didn’t… He travels and finds smuggling tunnels all over the country.

Luckily there was no active third rail.

The project kept getting interrupted by World Wars, escalating prices, and a Great Depression. They just gave up! They took out a six million dollar bond to build it in 1916 and only paid it off in 1966. With interest and all, it cost $13,019,982.45. I wish they could throw me that much money to do nothing…

To find out more about Tyler visit Salem House Press and buy Tyler’s latest book “Tyler Moves to Gibsonton Florida” on Amazon.com. It is now available in paperback at most bookstores. Ask for it by name. Keep checking back for great cheap vacation ideas that might end up being the best vacation you ever had!

My parents were once again traveling from one job location to another, across the country. If you know me by know; you know this is nothing new. My parents are software engineers and have been moving me back and forth the country since I was a toddler. Strange as it may be, the sound of tires rumbling in the wheel well below the backseat always lulls me to sleep. Anyway, once we were driving through Texas and my mother had my father slam on the brakes. They had just been paid from the last job; some of it was burning a hole in my mother’s pocket when she seen this Prada shop. She ran out and tried the door; it was locked.

The strange thing I noticed right away was, we were driving for miles without a sign of any neighborhood or lone house, but this Prada store appears… It felt like some portal to hell out of some Terry Gilliam movie. I wanted to yell at my mother not to touch the door because ‘It is evil.’ Just like in the movie she would of touched it anyway and have said, “…but it is Prada!”

This small building sits all alone on US 90 in the middle of the desert under the immense Texas sky. After we got to the next town, an hour away, we found out it’s an art installation created by Michael Emlgreen and Ingar Dragset called Prada Marfa.It cost the team $80,000 to install it.

The intention of the project is letting it go to ruin; letting nature reclaim it in whatever way she damned wanted to. Prada (who gave approval to use their logo and even donated the shoes and handbags that went inside the store) went along with it to poke fun at themselves on the fleeting nature of fashion. When I visit the Mad Scientist of the Pines, he always brings me to Docspond in Whiting, NJ.

Docspond is part of an old nudist colony named Nature’s Rest that burned down in the late 1960’s. The nudist colony was built by two masseuses from the Brooklyn who bought the property from their friend Joseph Parisi. Parisi was a member of Murder Inc., NYC mafia, controlled the garbage union after a few murders, and was an anarchist. The nudists and Parisi owned the old Manchester Iron Forge property which they bought and converted it into a aggregate business in which they would dispose of the bodies within for the NYC mafia. One road leading into the property was aptly named Bone Hill Road.

Now Docspond and the adjacent property where the hotel once stood is abandoned and nature has reclaimed it. The buildings and nature have this dance going on with vandals butting in from time to time into the dance. The Scientist explained to me that is what he loved about the place, how man and nature agreed to shape the property through time. So after I got over the fact it was a girl’s store; I learned to like the installation in Texas.

To find out more about Tyler visit Salem House Press and buy Tyler’s latest book “Tyler Moves to Gibsonton Florida” on Amazon.com. Keep checking back often for great cheap vacation ideas that might end up surprising you and becoming the best vacation you ever had! Red proved to be always full of surprises…

My friend Gavin Chappell sent me these photos from the UK.

Gavin says, “In the UK, where I live, there are stories of smugglers’ tunnels in Wallasey (just over the river from Liverpool), some of which exist for certain, others of which may be no more than rumours. There are eye witness accounts from the 19th century of tunnels extending as far as a mile, but most of them seems to have been blocked up. I have been in some and spoken to people who have been in others but most of them are inaccessible, and a lot of people refuse to believe they exist at all!”

Oh here at the Salem Tunnel Tour, we know better. In fact the people who built the tunnels in Salem where only second or third generation from England. They brought the skill from across the pond

Brought to you by the Salem Tunnel Tour, the best Salem walking tour!