It’s your favorite child travel adviser, Tyler,  once again bringing you the best in last-minute vacations. Your road trip planner for the weekend getaway to the coolest and strangest places in America. How do I know about them all? My parents are contract workers in the software industry and keep moving the family every 6 months…

Believe it or not, I have never been on Rt 66. Then again, I have been on Rt 127 a million times and still love every trip. This is definitely one of the coolest places in America. On this road are some of the finest American Castles. My father would sneak us down the private roads off Rt 127 to see some great Jacobean and Tudor Estates. In many of these homes several presidents made their summer residences. The road starts just outside of Salem in Beverly and heads to Gloucester. There are so many things to do on this road. Once you get into Gloucester you have a choice to continue north on 127 or follow 133. Today we are going left. On Rt 133 you will head out of Gloucester and enter Essex before moving on to Ipswich.

Well let’s start at the beginning. Once you cross the Salem-Beverly Bridge you will take a right. Follow that 1/16th of a mile and take a left. To your right will be some cool houses and beaches. On Independence Park, you can see a cannon used to shoot the HMS Nautilus during the Revolutionary War. It kept missing for hours along with the canons on Fort Lee Salem. The two locations did not even hit the ship once. The Nautilus just sailed away unscathed during high tide after getting stuck on a sand bar. At the light you will now take a right onto RT 127. Now just follow the signs.  The road for the most part is a straight shot of some beautiful curves. There are so many cool houses to see on this road!

The first stop you will want to make is to drive through the Endicott College campus and see their square Irish castle. It is not one of my favorite castles on the road, but it is cool to see anyway. Now head back onto Rt 127 and go about a 1/4 mile. To the left will be a stone wall and road heading up a hill. Park on it and see the face on the wall. Two young men were driving on RT 127 when they lost control of the car and hit this wall. In commemoration of them their friends had added simple clay faces to the wall. Now head back onto the road and go slow. You do not want to miss anything.

Then you will go through Beverly Farms downtown area. After leaving Beverly Farms and right before entering Manchester take a right at the Old Corner Inn and go over the train bridge. Take a left and stop for a second and look under the bridge, you might even get to see the train go by. Then drive straight to the water. Take a break and walk out on the pier to the gazebo in the harbor. Its pretty cool too. Now turn around and drive pass the bridge. Follow the road and ignore all the private road signs. There are some real cool homes on the road. At the end take a left back on to Rt 127 and drive past the Old Corner Inn again. Next, you will enter Manchester-by-the-Sea. Just keep going and follow the signs for Rt 127.

About 2 miles out of town you will see a green sign for Magnolia, take that right. You will curve around to the downtown section. Drive straight through the square and up the hill. You will curve up the hill and curve your way down. At the bottom right there will be a dirt parking lot. Park in it. Follow the trail to the cliff on the ocean and you have found Rafe’s Chasm. Longfellow set his poem The Wreck of the Hesperus here. It is a great rock hopping place. You can hop from rock to rock for hours here. Sometimes you will see seals. There is one section of rocks that looks like an ancient boat ramp. To the right is a large chasm you can walk in during low tide. From the top, you can repel down. It looks amazing right after a storm because the ocean turns green and foamy. During hurricane Katrina, the waves were 40 ft tall over the top of the 40 ft cliffs here. That was an awesome storm! The most recent Northeaster was almost as fun.

Once you leave the parking lot continue north on the road. As you curve to the left you will see another castle. Hammond Castle is pretty cool. They have swords and armor inside. There is an indoor pool with a ceiling that opens and closes. They can make it rain and lightning in the room. Around the pool is the front of a Bavarian medieval merchant village. The castle was put together out of several castles from Europe. They say John Hammond who owns the place haunts the castle still. Sometimes he takes a shape of a black cat and sits in his favorite chair. He loved his cats, his dogs, not so much… He also invented radio control and we would sail a ghost ship from his living room in the harbor scaring the neighbors. Well actually a friend of his father, Nikola Tesla, gave him a bunch of inventions he was not going to pursue. Then his father screwed Tesla’s dreams of free electricity after he invested in millions of dollars in copper to be placed on telephone poles to make the electric company a fortune. Hammond’s father was a friend of Cecil Rhodes, who almost got him killed if it was not for Mark Twain. Rhodes created the Rhodes scholarship to indoctrinate past colonies of England at Oxford and take them over again (including America). he also created apartheid…

Continue heading north till you come back to Rt 127. Take a right. Go for almost a mile and take a left at the fork and head toward Essex on Rt 133. About 3 miles down the road you will enter downtown Essex. On the right you will see the Flying Dragon Antiques. If you are a treasure hunter like myself, you will love scouring through this place. Also up the road is the White Elephant antique store. This store is pretty cool, but their outlet store down the road on Rt 133 is even better because they have a $5 and $1 section! Unfortunately it closed and is now in a section in the back on one deep and long table of their original shop and upstairs is half price. 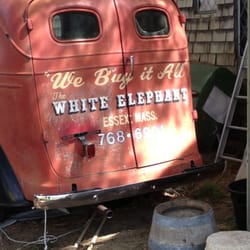 Go another 2 miles after where the White Elephant outlet store was and take a right where the white sign says Castle Hill. Castle Hill is the mansion used in several films like Witches of Eastwick and Ghosts of Girlfriends Past. Come to the T in the road and take a right. Go for a half-mile and take a right into Russell Orchards. Stop here for some great chunky cheese bread, some fudge, and a hot cider in their farm stand. Then go out back and feed the animals. In season you can pick your fruit and vegetables.

When you are done take a left out of the parking lot and head back the way you came. When you get back to that T, just drive straight till the next T in the road. Then take a right. You will pass the Ipswich River on the right with a cool waterfall and keep going and take the next left. On this road is largest amount of 1600 and 1700 houses still occupied in the country. At the end of the road you will meet up with Rt 133 again. This time head south on RT 133 and head back through downtown Ipswich. Follow the signs and stay on Rt 133 till you come to a fork with an old hospital on a hill. Keep going straight on Rt 1A South. Now Rt 1A and Rt 22 is also a really cool road with great gardens, houses, and country drives but you must be tired by now and those rides should be left for another day. So now go home!

To find out more about Tyler visit Salem House Press and buy Tyler’s latest book “Tyler Moves to Gibsonton Florida” on Amazon.com. Keep checking back often for great cheap vacation ideas that might end up surprising you and becoming the best vacation you ever had!