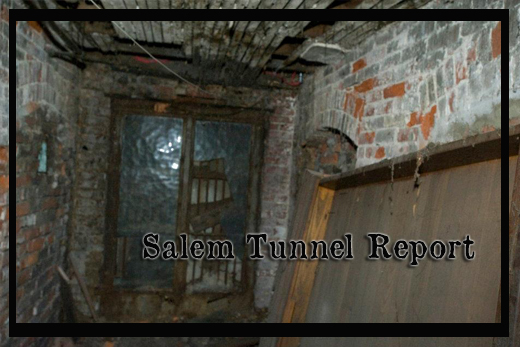 Welcome to the Salem Tunnel Report. Every Monday we will post new and old tunnel finds along with those who built them. In our posts you will learn how Salem has shaped American history from the profits of the smuggling that happened in these tunnels; sometimes for the good, but more often not.

This was the site of the First Church in Salem and the Old State House. The State House sat on the corner of Washington, Short, and Essex Streets. The Church sat in from here. The church was founded in 1629 and has become the first church regularly organized in the country. Their second building being a one room church was built in 1634. The building was expanded in 1639 and it was last used in 1670. In 1673 the building was moved to Boston Street. Now it is behind Plummer Hall on Essex Street.

Francis Peabody found it behind a tannery on Boston Street and had it moved to its present location. At one time it was used as an tavern and then later a horse stable. So it is safe to say the first church in the country was full of horse shit.

In 1670 they built the third building for worship. In 1718 they built a 4th church on this spot. This is also the location where the first use of a ballot was made in the country.

They were Protestants. Rev. Francis Higginson was the first Teacher and Rev. Samuel Skelton the first minister. In 1634 the church’s third minister was Roger Williams. He lasted 2 years before he was exiled for believing the Native Americans should be compensated for the land the Colonialists stole. So he founded Providence Rhode Island and created the first Baptist church in America.

In 1636 Rev. Hugh Peter took over. In 1641 he left for England and became Oliver Cromwell’s personal Chaplain. What a mistake, Cromwell was an ass. In 1660 Peters was charged with regicide for the first suggestion and assisting in the Execution of Charles I. He was beheaded after being drawn and quartered.

The next Rev. was George Downing who returned to England and became a soldier. Downing Street in London was his property and now the prime minister lives on that road.

Then Rev. John Higginson, Rev. Francis Higginson’s son, presided though the Witchcraft Trials in 1692. His junior minister Noyes was ignoble. It was him who really fanned the flames of the witch hysteria. One of the accused witches told Noyes, “May God give you blood to drink.” In 1717 Noyes choked on his own blood and died.

The church split into the North Church and The First Church in 1772. Rev. Asa Dunbar presided over the First Church. He was Henry David Thoreau’s paternal grandfather. Rev. Barnard who was the minister of the North Church negotiated with General Leslie to retreat from Salem in 1775. Leslie’s Retreat was the first conflict in the Revolutionary War before the Battle on the Green. Canons that day were smuggled out of Salem to Lexington.

The church later became the First Congregational Society of Salem in 1824.
In 1826 the current building was built. The first floor was used for retail and the second floor for religious ceremonies. By 1874 a major remodeling was done. The towers were added and the building extended on Higginson Square. At that time John P. Peabody sold dry and fancy goods while Daniel Low had his jewelry store on the Essex Street Side. The National Exchange Bank had entrances on Washington Street. In 1923 Daniel Low and Company acquired the property in the year the First Church merged with the North Church further down on Essex Street. Daniel Low was also an aid to Grand Marshall of the Essex Lodge.

There is one tunnel exiting the building that leads up Washington toward the train station. It is rumored this went to the Lyceum passing entrances to the city hall and the Kinsman Block. Then leading toward Riley Plaza is a tunnel entrance at the back of a vault leading to the second Asiatic Bank location (The Ledger Restaurant currently). Also Daniel Low fixed up the tunnel leading across Higginson Sq. into his warehouse that sits to the right of Old Town Hall (old Goddess Treasure Chest location).

Low poured a concrete floor in the tunnel to prevent the state from having access to the graves of several runaway slaves. Daniel Low was the jeweler who invented souvenir spoons and he also sold KKK belt buckles, money clips, and lighters.

His warehouse has a storefront below street level. The tunnel enters the back of this building and goes up a staircase to a door on Higginson Square. If you pass the staircase it turns right into the submerged store front.

The past owner of this shop also owns the condo in the Pickman-Derby Block where the tunnel was turned into a wine cellar. Her basement door exhibits how they can remove the ceiling of the tunnel to expose a cellar door. Few other examples of this can be seen in the McIntire District. Previous to this location her store was in the Downing Block which is also connected.

The roof of the tunnel to his warehouse has brick arches under the flat granite top every 3 feet supported on thick metal straps running across the width of the tunnel. When the Essex Lodge was built in 1918, the previous tunnels under the old Derby Mansion site would be refitted in the same manner. Recently I got to tour Low’s house on Essex Street and Botts Court and saw the tunnel coming out of his house too.

I actually was filmed in this tunnel with Robert Irvine for his new show that premiered this month on the Travel Channel called Kitchen Expeditions. Check it out, for that is another story!

For more read info Salem Secret Underground: The History of the Tunnels in the City and its sequel Sub Rosa by Chris Dowgin published by Salem House Press. Available at Barnes & Noble, Remember Salem, The Witch House, Jolie Tea, and Amazon.com.