He was an Italian Renaissance humanist author, artist, architect, poet, priest, linguist, philosopher, and cryptographer; he epitomized the Renaissance Man. Although he is often characterized exclusively as an architect, as James Beck has observed,[1] “to single out one of Leon Battista’s ‘fields’ over others as somehow functionally independent and self-sufficient is of no help at all to any effort to characterize Alberti’s extensive explorations in the fine arts.” Although Alberti is known mostly for being an artist, he was also a mathematician of many sorts and made great advances to this field during the 15th century. 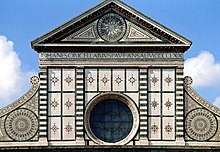 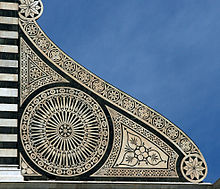 One of the giant scrolls at Santa Maria Novella

This is one of many of Leonardo da’ Vinci’s contemporaries discussed within the pages of Universal Man: Da’ Vinci’ Soul reborn written by a descendant of Leon Battista Alberti, Richard Aliberti a modern sculptor prominent in the North End of Boston.