Welcome back to my blog about balloons, rocket ships, airplanes, space travel, Star Wars, sci-fi, and everything about flying! After I took my amazing flight, my friend told me about Lawn Chair Larry. He said he floated around with a bunch of balloons, a BB gun, a lawn chair, and a cooler. My friend also told me he got a honorable mention in the Darwin Awards on the account that he did not die.

Walters had always dreamed of flying but was unable to become a pilot in the United States Air Force because of his poor eyesight. He was my age when he got this idea. His intention was to attach a few helium-filled weather balloons to his lawn chair, cut the anchor, and then float above his backyard at a height of about 30 feet (9.1 m) for several hours. He planned to use a pellet gun to burst balloons to float gently to the ground. 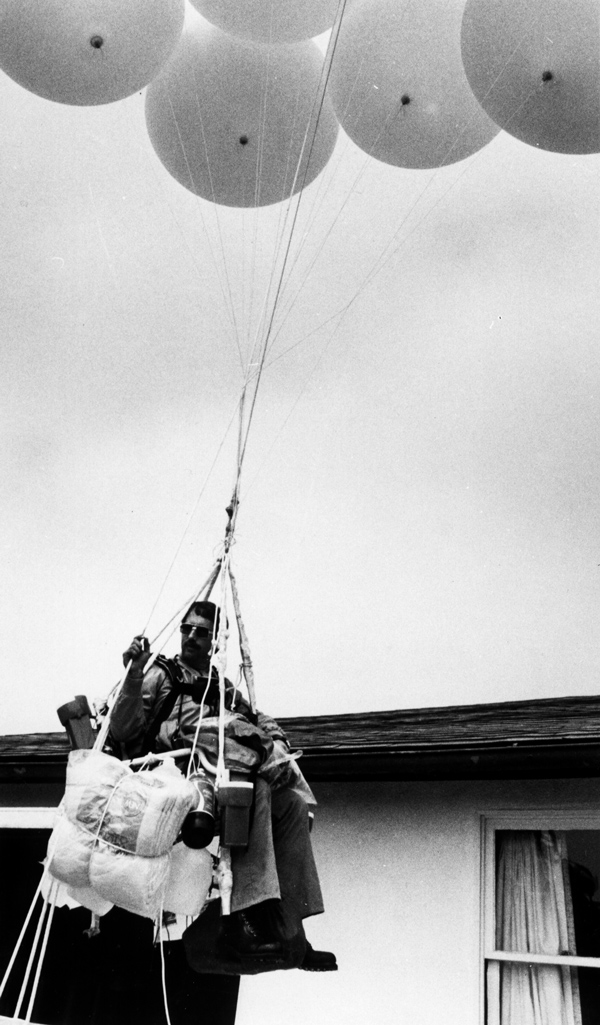 In 1982, Walters purchased 45 eight-foot weather balloons and obtained some helium tanks. He used a forged requisition from his employer, FilmFair Studios, saying the balloons were for a TV commercial. Walters attached the balloons to his lawn chair, filled them, put on a parachute, and strapped himself into the chair in the backyard of a home at 1633 W. 7th St. in San Pedro. He took his pellet gun, a CB radio, sandwiches, cold beer, and a camera. His friends cut the cord that tied his lawn chair to his Jeep and he zoomed to about 15,000 feet. At first, he did not dare shoot any balloons, fearing that he might unbalance the load and cause himself to spill out. He slowly drifted over Long Beach and crossed the primary approach corridor of Long Beach Airport. I had the same problem over Logan Airport outside of Boston…

He was in contact with REACT, a Citizen band radio monitoring organization, who recorded their conversation:

REACT: What information do you wish me to tell [the airport] at this time as to your location and your difficulty?
Larry: Ah, the difficulty is, ah, this was an unauthorized balloon launch, and, uh, I know I’m in a federal airspace, and, uh, I’m sure my ground crew has alerted the proper authority. But, uh, just call them and tell them I’m okay.

After 45 minutes in the sky, he shot several balloons, and then accidentally dropped his pellet gun overboard. He descended slowly until the balloons’ dangling cables got caught in a power line, causing a 20-minute blackout in a Long Beach neighborhood. Walters was able to climb to the ground.

I always had dreams in which I could fly by waving my feet. I would float up and slowly glide down. At times I would be afraid that I might hit the power lines, so I would flap my feet some more and hope I did it in time to raise over them. Oh boy, Larry actually hit them and lived…

In my amazing adventure, I have seen Larry flying above Beverly on his second flight. It was cool seeing him up there with the Hood Balloon above him. Something no one will ever see again, and I was there!

To find out more about me visit Salem House Press and buy my book on Amazon.com!