It’s your favorite child travel adviser, Tyler,  once again bringing you the best in last minute vacations. Your road trip planner for the weekend getaway to the coolest and strangest places in America. How do I know about them all? My parents are contract workers in the software industry and keep moving the family every 6 months….

I used to love the book and the movie the Borrowers. Imagine if they had their own city? In Ave Maria Grotto, Cullman, Ala. they do. Well I think they could of moved in and not had any trouble… There is this monk from Bavaria, Brother Joseph Zoettl, who made these wonderful miniatures of shrines and cities from around the world. It is real awesome. My parents and I lived in Cullman for 3 months before I found this place. Then we were off to who knows where 2 months later. It was a short contract…

The builder of the miniatures at the Ave Maria Grotto was a Benedictine Monk — Brother Joseph Zoettl, O.S.B. Born in Landshut, Bavaria in 1878, he was maimed in an accident that gave him a hunchback, but luckily it did not hurt his ability to bend over and build the miniatures.

In contemplating the Main Grotto, which was to be the centerpiece of the whole park, Br. Joseph had yet to decide on the type of building materials he would employ. A solution was handed to him when there was a derailment of the L&N railroad. One freight car full of marble overturned and the marble was crushed. It was useless to the owner so he gave it to Saint Bernard. The monks went up and carted it down; it was exactly what Brother Joseph needed as the main stalactites to hang in the Great Grotto. The material which adorned the works had been donated by people who admired and had seen the beauty in his previous works: the small grottoes enclosing Father Lawrence O’Leary’s bargain statues, crucifixes, ash trays, etc. People sent colored glass, marbles, cold cream jars, punctured commode floats, wrecked marble, broken bathroom tile, costume jewelry, gifts from every state in the union and from many foreign countries.

The first replicas were erected on the monastery recreation grounds, but because of the large number of visitors, a new site was selected and on May 17, 1934 the Ave Maria Grotto was dedicated. Brother Joseph continued his work for over 40 years, using materials sent from all over the world. He built his last model, the Basilica in Lourdes, at the age of 80, in 1958. 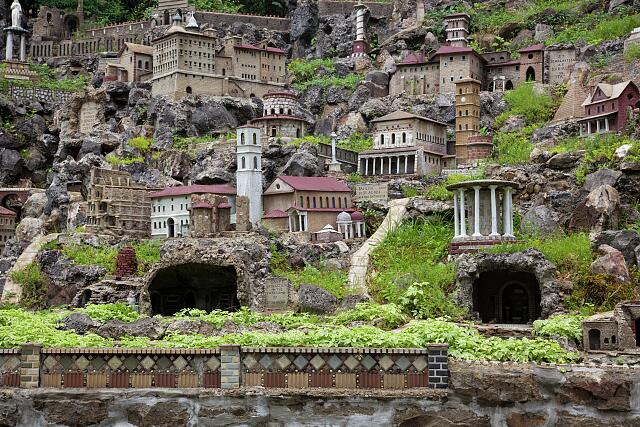 The Ave Maria Grotto, located on the grounds of Alabama’s first and only Benedictine Abbey, consists of over 125 miniatures, reproductions of famous churches, shrines and buildings. Encompassing an area of over three acres, this miniature fairyland sees visitors from all over the world.

More detailed information can be found in the book titled Miniature Miracle by John Morris sold in the Grotto gift shop. I got a copy of the book and I use it as reference as I construct houses for my train set.

It goes to prove in the most sleepy towns if you look hard enough you will find something that is truly amazing. For I did find something in Cullman. Alabama!