I’m listening to Ready Player One. It is an update Grail Romance. Some of the major themes and archetypes are present: the man who created the virtual world is the Fisher King and Merlin, the Welp’s avatar in the virtual world is Parzival, the real world is the wasteland and crossing the threshold is placing on the VR headset, and the random adventures the knights face are the challenges to level up. The story lacks the psychological development characteristic of self-actualization tales of myths and fairy tales though, but it replaces it enough with fun references to popular 80s media.

To solve the challenges to free the wasteland and find the Easter egg the Welp must dig into the creator’s life and dig out clues from his love of media and pop culture to solve his riddles to finally come to the point to ask, “What ails you?” to win the grail. As in the Eschenbach’s Parzival, the Fisher King’s wound came from complications arriving from romance that sent the world into the wasteland. In the tale, the Wasteland is created out of negligence as everyone began to live in the virtual world and let the real one go.

Then again, the psychological story might be that, in our world, people might be giving up the world to work, video games, and social media contact. Then there is the science of Simulation Theory (Good talk on it on Ted Interview with Donal Hoffman: https://www.ted.com/talks/the_ted_interview_donald_hoffman_has_a_radical_new_theory_on_how_we_experience_reality), in which we already live in the simulation and our higher soul is holding the joystick sitting on the couch. We might be living in a similar world to the one in the story, but we don’t shift between the two anymore. That could be the psychological story. The threat we could end up this way or that we did already.*

It could be similar to the Valentinian Gnostic principle that the archetype of Christ descended into the world Sophia created after she fell from the higher world where her fractured psychology manifested into a myriad of lives on Earth through time governed by her Ego/YAHWEH and Shadow/Lucifer, the twin brothers. Salem/Evening star and Lucifer/ Morning Star are both in fact the planet Venus seen at different times… Christ by unifying us humans will bridge the gap between the disparate poles of the ego and shadow and in turn, unify the mind of Sophia and raise her back into the higher world. The Grail stories if that, have always been Gnostic tales. How do we self-actualize through the compassion of healing an other’s ailments, Parzival asking the Fischer King ‘what ails him’, and finding at-one-ment with them. ‘I am the land, and the land is I’ from Excalibur and all of that which is frequently brought up in Ready Player One. The unification of Sophia with the hopes she dreams a happy dream in which we find ourselves living in. Then again is there a way out as the fictional characters within the fictitious world of Sophia’ World rows across a pond into reality.

Been a long time since I wrote a book review…The book is light to most readers with a fun romp through Princess Bride, Excalibur, Iron Giant, Breakfast Club, and such references within a tale of the individual versus the evil corporation framework, but to others, it is an onion with many layers.

Sorry to exercise my brain at your expense…

How are Pam, Marina, Madeline and the rest of the gang doing? I am so bad with names also, I know it is not Melody, but his name sounds like it; how is he doing too. And continuing with brain farts, and your husband as well… I just can’t think of men’s names today…How is he doing? What is he reading?

I have just been riding my bike through the Pines. I have returned to an ancient dirt road that goes past a swamp and terminates at the foundation of one of the many 1920’s resorts that dotted the Pines for the Gilded Age wealth. With Social Distancing and all, I find myself with a headset and dancing on a wooden bridge over Green Fox Swamp a lot. No longer can I found a club to become the public spectacle I usually become. Pam and Marina might appreciate that. Within the next few days after the rain, I  will be heading to an old 1800s terracotta factory which has become a Forestial museum for graffiti and do an oil or acrylic and see how long till they paint it over. Good thing for cheap digital photography, I will always have a copy. Here is what the ruin looks like. 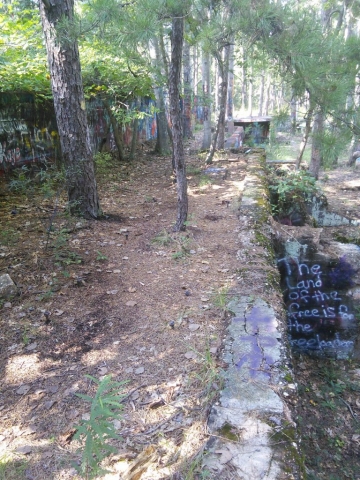 On this site were some of the first tunnels I had found, little did I know years later I would be in Salem…

They were tunnels to place the wood under the kiln rows or to provide air to the fires.

I was going to Double Trouble State Park which is an old site that farmed cranberries and lumber. I would head out there and meet random people while playing my flute on a bridge over Cedar Creek. Now they shut that down…Social Distancing and all…

This week I have been walking around the wood I grew up in along a creek with a few ponds, a couple of swamps, and a lake and found Native American homesteads I have been walking through for 40 years without realizing it. Prior to the Bog Iron camps, Chicken farm, and the Nudist Resort that worked with the Mafia (A story for another time), there were about 9 homesteads that marked properties with oak and pine with forked tops demarcating two circles on either side of the property bordered by Mountain Laurel. In the center of one of the two circles, there would be an oak with three trunks and in the middle of the other a single oak. The center oaks are not common here, the Pines mostly grow scrub oaks that are about 4 feet tall. The center oaks were about 25″.  I believe one circle was for their home or farm and the other was a sacred space. Where two sites met, the sacred spaces were next to each other with the home site on either end. Maybe you could be spiritually connected to your children, but have enough space to live your own life out of sight. They were growing acorns, blueberries, and wintergreen. Later sites with younger center oaks you can see that some of the traditions were being lost. Also, they would bend and twist pine and oak trunks or bend their tops at ninety degrees. About a 1/16 of a mile away from the lake might of been a sacred oak grove. It is a clearing with a central tall oak with several smaller ones of another species with forked tops. Things you get up to when you’re bored…

Well, I will see what future adventures lay ahead. What else have you guys been up to? If you want, you can forward this to anyone you might think would be interested in reading it. Also anyway to get a special order of Lapsang Souchong?